The first slot machines in the slot machines history were made in 1891 in Brooklyn. The initial images were cards and the payouts were according to the poker combinations. Those machines had 5 reels with 50 numbers on them. The initial machines didn’t pay off coins, instead prizes were stuff from the bar where the slot machine was placed. The player inserted a coin and pulled the lever. Most Of The Time, a Spades Ten and the Jack of Hearts were taken from the deck and thus the gamer odds decreased. 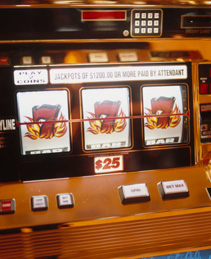 The Liberty Bell, the slot machine like gamblers know it today was designed by Charles Frey in 1899. These machines were with 3 reels and had 5 numbers diamonds and hearts and spades, horse shoes and Liberty Bell. The machine helped Fey to create the automatic payoff system. Three bells in one payline won a pot of 10 coins.

Soon after, the next period of the slot machines history started when the Bell Fruit company introduced the slots with symbols of fruits that represented the chewing gums with fruit flavours. The additional symbol the BAR had been the logo of Bell Fruit company.

The electrical slots were created in 1964 and was named the Money Honey. The slots machine game gave higher jackpots and multiple coins. After, the slot machines were supplied with sounds and flashing lights.

Slots Games became very popular once in the 1970’s the Dollar Machine had been designed and the slots game was provided by most of the online casino sites.

The video poker machine had been introduced by the Sircoma in 1980. The players in this period of the slot machine history were not able to watch the wheels rotating and at first they could not trust this game. Still, afterward the game became extremely popular and now is offered in all the casino halls.

Later the bonus feature was made and the players had a chance to receive free spins and win the jackpot.

Now, there are cashless slot machine games with tickets and cards with money on them and the touch monitor slots games with simple help menus.

In modern casinos the slots are extremely popular offering more and more new options and bonuses. With the invention of the web variant more gamers gained access to the slots game and got the opportunity to win big.

The slots games is becoming more popular day after day gaining the attention of lots of players.